Termites tuck into Nicholson’s Journals in Bombay in 1859

Here is an extract from the Journal of the Bombay Branch of the Royal Asiatic Society, from Monday 28th November 1859 telling of a sad fate for Nicholson’s Journal.

“It is with much regret that the Committee have to inform the Society that the White Ants, which infect the Town Hall throughout, have found their way into the Library, and destroyed many of the books.

This was first discovered in September 1858, and since that there have been several incursions … during which 12 works or 33 volumes have been destroyed, and 12 works or 38 volumes slightly injured; fortunately those which have been destroyed have chiefly consisted of Novels, the others have been works in the classes of Classics and Chemistry; - “Nicholson’s Journal” however, has severely suffered.”

Can there be a more perfect place for a day out than Bakewell? Not only is it in the centre of the most fabulous countryside with numerous walks and access to superb fly-fishing, but it is home to two, YES TWO! independent bookshops.

I cannot pass an antiquarian bookshop without popping in to see if they have anything by Nicholson (or Godwin or Holcroft). Invariably, the proprietor has not heard of William Nicholson (1753-1815) and thinks I mean the artist (1872 – 1949), and invariably there is nothing on the shelf for me.

But this weekend, I was thrilled to see that a new antiquarian bookshop had opened up in Bakewell and, although the owner had not heard of our hero, I was delighted to find a copy of Nicholson’s Chemical Dictionary, 3rd Edition in their scientific collection.

Hawkridge Books had a wonderful selection of books, and the shop is nicely laid out with plenty of space to move around – it is very stylish too. I have since learned that they specialise in ornithology and natural history, so it is well worth a visit. 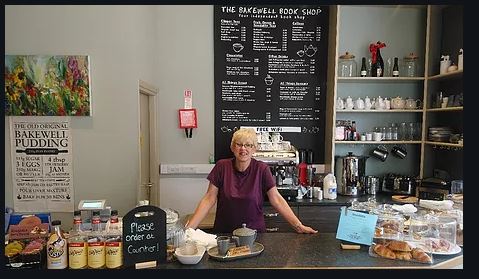 The Bakewell Bookshop has long been a favourite pitstop after a day on the River Wye. As well as a lovely selection of books - an intelligent choice of fiction and a strong selection on local walks – it has the most welcoming coffee shop. You sit on tables within the bookshop and can borrow their Scrabble set if the weather looks too miserable to go outside. We treated ourselves to the Tea for Two – each person gets a scone, a piece of cake and a tray bake. The scones were fresh-baked that day (always the test of a good cakery), the carrot cake was ‘moistyliscious’ and the Bakewell tart was so good we had to take it home.

Both are well worth a visit.

The following article was first published in the Antiquarian Booksellers' Association newsletter on 15 August 2018.

‘I used to write a page or two perhaps in half a year, and I remember laughing heartily at the celebrated experimentalist Nicholson who told me that in twenty years he had written as much as would make three hundred Octavo volumes.’
William Hazlitt, 1821

This year has seen numerous celebrations of Mary Shelley’s ‘foundational work in science fiction’, but where did Mary Shelley learn about electricity?

Historians often trace this knowledge to a copy of Humphry Davy’s Elements of Chemical Philosophy which was published in 1816 – but many years before this, the child Mary Wollstonecraft Godwin had access to scientific instruments at 10 Soho Square with her playmates – the five daughters of William Nicholson (1753-1815).

The scientist and publisher William Nicholson was one of her father’s closest friends.  In his diary, William Godwin records more than 500 meetings with Nicholson and his family between November 1788 and February 1810. Aside from their mutual friend the dramatist Thomas Holcroft (1,435 mentions) and direct family members, only a handful of other acquaintances are mentioned more frequently in Godwin’s diary.

Nicholson had opened a Scientific and Classical School at his home in Soho Square in 1800.  It was here in the Spring that, with Anthony Carlisle, he famously decomposed water into hydrogen and oxygen using the process now called electrolysis.

Electrical experiments had long been an interest of Nicholson who had two papers on the subject read to the Royal Society by Sir Joseph Banks in 1788 and 1789.

In those days, science - or natural philosophy as it was called - was also a leisure activity. Scientific instruments were the latest toys for the affluent and experiments provided entertainment. One after-dinner game was The Electric Kiss: where young men would attempt to kiss a young lady who had been charged with a high level of static electricity. Sadly, the kisses were rarely obtained as, on approaching the young lady, the men would be jolted away by an electric shock.

In a house full of several children, and a dozen energetic students, Mary witnessed and is likely to have participated in experiments and pranks with the air pump or Nicholson’s revolving doubler – his invention of 1788 with which you could create a continuous electrical charge.

Despite his circle of literary friends, Nicholson is better known among historians of science for A Journal of Natural Philosophy, Chemistry and the Arts which ran between 1797 and 1813 and was the first monthly scientific journal in Britain. It revolutionised the speed at which scientific information could spread - in the same way that social media has done more recently - and the Godwin family no doubt received copies.

Full sets of Nicholson’s Journal, as it was commonly known, are rare.  Certain editions are particularly sought after, such as those which include George Cayley’s three papers on the invention of the aeroplane.

But Nicholson’s first success as an author was fifteen years previously with his Introduction to Natural Philosophy in 1782.  This was the same year that he wrote the prelude to Holcroft’s play Duplicity.

Nicholson quickly abandoned writing for the theatre, but he never abandoned his literary friends with their anti-establishment views, and his body of work is more extensive than the voluminous scientific translations and chemical dictionaries for which he is best known – some of which change hands for thousands of pounds.

Other works included a six-day walking tour of London, a book on navigation – based on Nicholson’s experiences as a young man with the East India Company – and translations of the exotic biographies of the Indian Sultan Hyder Ali Khan and the Hungarianadventurer Count Maurice de Benyowsky.  Nicholson also contributed short biographies for John Aikin’s General Biography series; he launched The General Review which ran for just six months in 1806; and heproduced a six-part encyclopedia.

Before Nicholson came to London, he had spent a period working for the potter Josiah Wedgwood in Amsterdam.  Wedgwood held young Nicholson in high regard, commenting in 1777 that ‘I have not the least doubt of Mr Nicholson's integrity and honour’. Then in 1785, when Wedgwood was Chairman of the recently established General Chamber of Manufacturers of Great Britain, he appointed Nicholson as secretary.  In this role, Nicholson produced several papers on commercial issues including on the proposed IrishTreaty and on laws relating to the production and export of wool.

Towards the end of his life, Nicholson put his technical knowledge to work as a patent agent and later as a civil engineer, consulting on water supply projects in West London and Portsmouth.  The latter project faced stiff competition from another local water company and, in 1810, Nicholson published A Letter to the Incorporated Company of Proprietors of the Portsea-Island Water-Works.

As William Hazlitt indicated, in the opening quotation, Nicholson’s works were extensive. His activities were varied and there is much in his writings that will be of interest to historians of literature, commerce and inventions, as well as to historians of science and the Enlightenment.

A full list of Nicholson’s publications can be found in The Life of William Nicholson, by his Son, which was first published by Peter Owen Publishers earlier this year (£13.99). The original manuscript, written 150 years ago in 1868, is held at the Bodleian Library.

Free postage and packing is offered to members of the ABA when purchasing direct from www.PeterOwen.com.  Simply use the Coupon code ‘1753-1815’ in the shopping cart before proceeding to checkout.